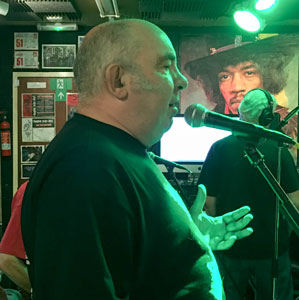 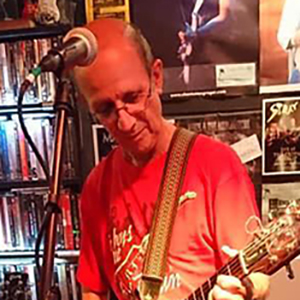 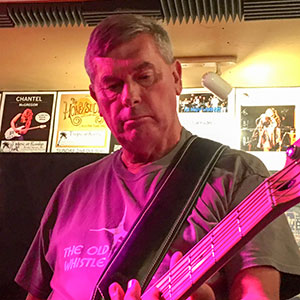 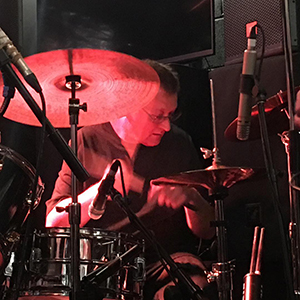 Fenzyx started life in 1979 when Tony Gialanze and Jim Rutter, both from former band Demon Preacher, added Gerry Lyons and Paul O’Connell to the line up. Fenzyx then spent a few months rehearsing at Halligan's Rehearsal Rooms on the Holloway Road in Islington, North London before finally unveiling itself to the world.

Demon Preacher (which also featured Nik Wade - now Nik Fiend of Alien Sex Fiend) had moderate success with 'Little Miss Perfect', a song about the notorious Joyce McKinney, who got up to all sorts of things - allegedly! Preacher also recorded 'Royal Northern N7', a song critical of The Royal Northern Hospital in Islington, following John Lydon's brother's attack on it after he had received some treatment there. 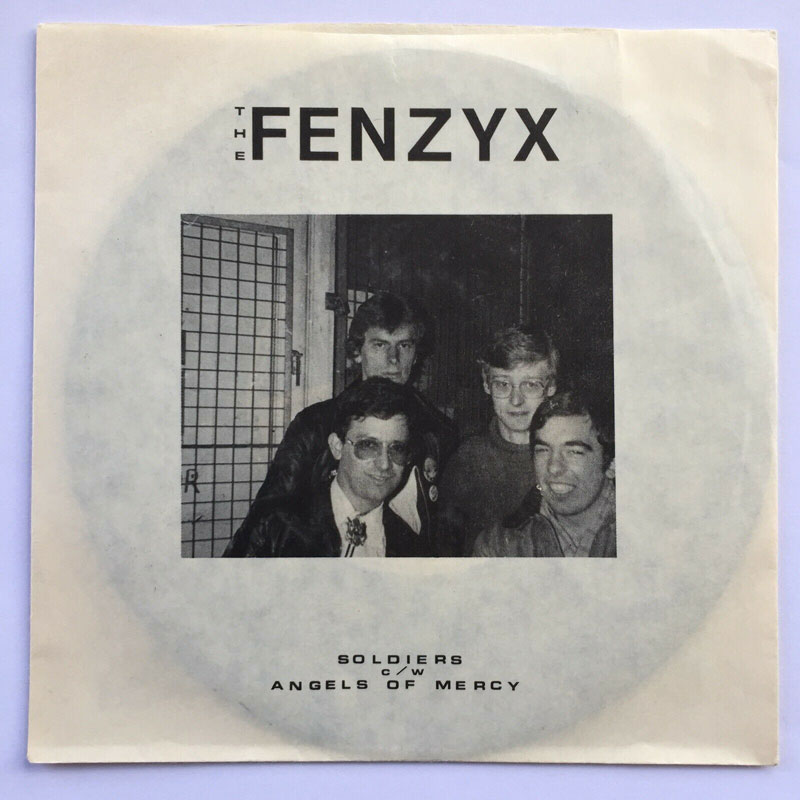 In 1980 Fenzyx recorded the double A sided 'Soldiers' c/w 'Angels of Mercy' at IPS Studios in Goldhawk Road, Shepherds Bush for the independent Ellie Jay label. The single saw a release in 1981 with only 500 copies pressed. Nik Wade produced with the sleeve artwork and notes being penned by Ray Mathew, sometimes rock journalist for the illustrious Islington Gazette and as Ray Zell, a contributor to Kerrang! (the 'Pandora Peroxide' comic strip) and member of local glam rock band Marionette.

Razzle, drummer with The Dark and another ex-Demon Preacher member, filled in with Marionette on a few occasions and went on to join Hanoi Rocks but was later tragically killed in a car accident in the US in 1984. 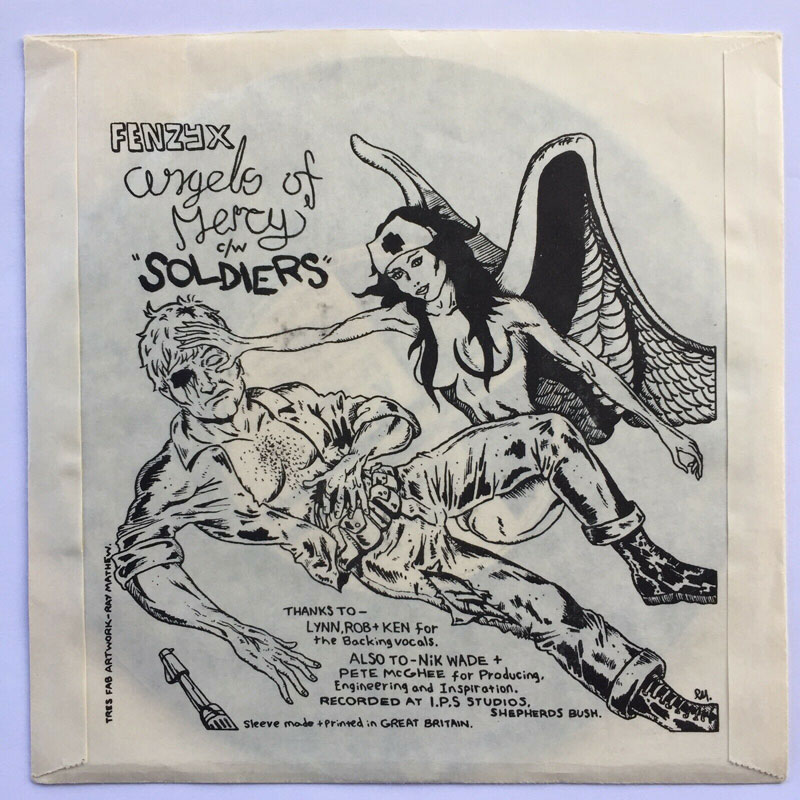 Both songs were recorded in a punk / new wave style reflecting Nik Wade's influence and production. 'Soldiers' had an anti-war theme while 'Angels of Mercy' had a political message protesting against NHS cuts, in particular the closure of the casualty unit of The Royal Northern hospital; the song taking a swipe in its closing bars at Demon Preacher’s previous offering 'Royal Northern N7'.

The single received support from the doctors, nurses and staff at the hospital and allegedly received airplay by BBC Radio 1's John Peel, but despite this; did not sell in significant numbers. However, today it is sought by collectors as a punk / new wave rarity, particularly so across Europe, following successive entries in 'Record Collector's - Rare Record Price Guide' and some heavy online trading (see some results on popsike.com here Fenzyx Rare Records Auction Results

Rehearsals at Halligan's were intense and the band regularly bumped into or socialised with others using the studios at the time; among them Eddie Tenpole of Tenpole Tudor ('Swords of a Thousand Men' and later of Channel 4's 'The Crystal Maze'), Nik Wade, Madness, Adam Ant and the then unknown Spandau Ballet. Fenzyx also enjoyed several games of Pool with the actor Arthur Mullard in one of the local pubs!

Fenzyx played the North London pub circuit including; The Bull & Gate, The Pied Bull, The Butcher's Arms, George Robey's Little Rainbow, The Wellington (Shepherds Bush), The City of London, and The Crown (under the name of Page 18) in Harlesden, the latter re-christened The Flying Crate by the band when a fight in the audience broke out while they were on stage! 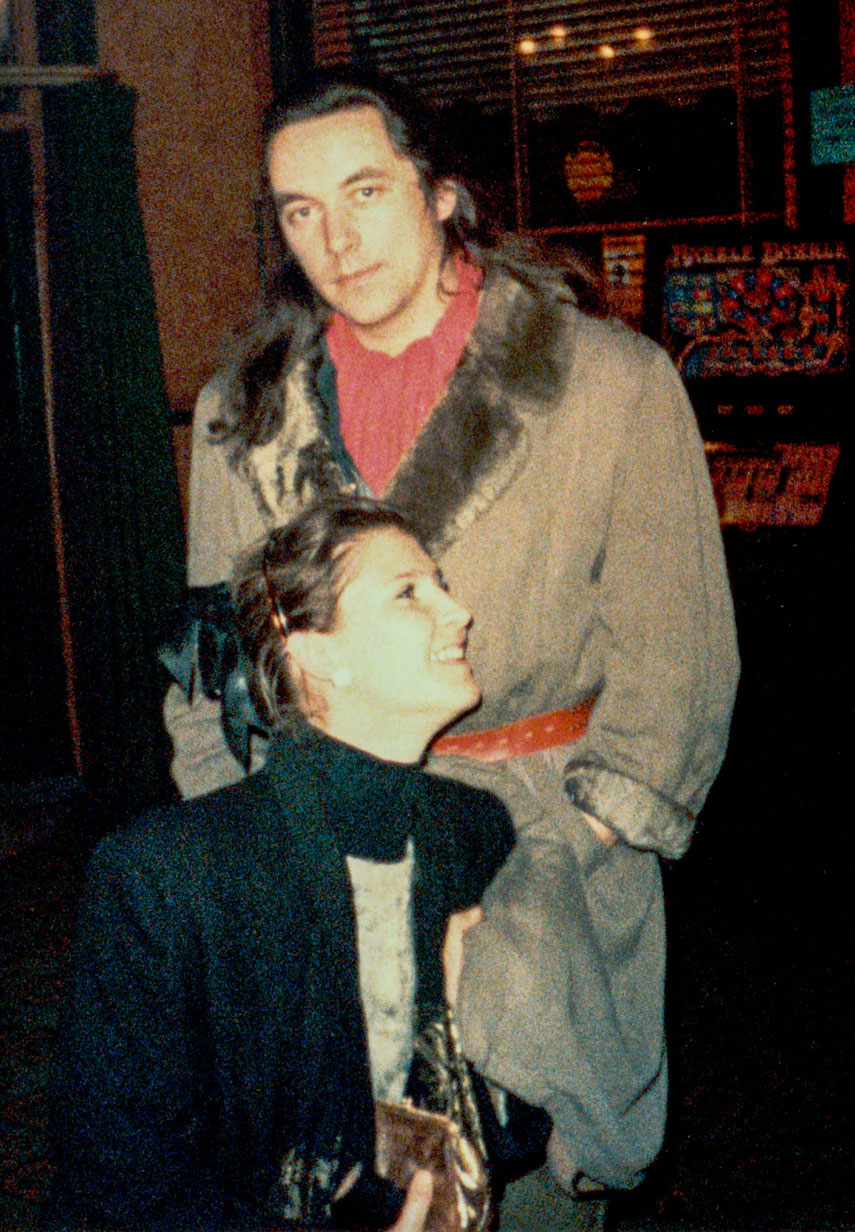 They finally settled on a Friday night residency at The Pocock Arms in Caledonian Road, where Sugs from Madness and Jackie Leven from Doll by Doll came to see them.

Jackie reacted favourably to the bands version of 'Natural' acknowledging that their up-tempo treatment in many ways worked better than the Doll by Doll original. Initial arrangements were made for Fenzyx to record their version with Jackie but ultimately this never came about.

Vocalists Tony Heasman, Chris Balfe, Andy, Anne Maloney (also variously known as CaCa, Jaguar and Anna Din!), Wendy Gude, Alex Couchman and lead guitarists Mark Ward, Colin Burke (and one keyboard player, Martin - nicknamed 'clack' due to the fact that several of the keys on his keyboard didn't work) came and went through the Fenzyx doors. With each different line-up came a slightly different musical direction and Fenzyx moved from punk / new wave through to R'n'B and Rock, their later live performances featuring songs from each of the bands previous styles. 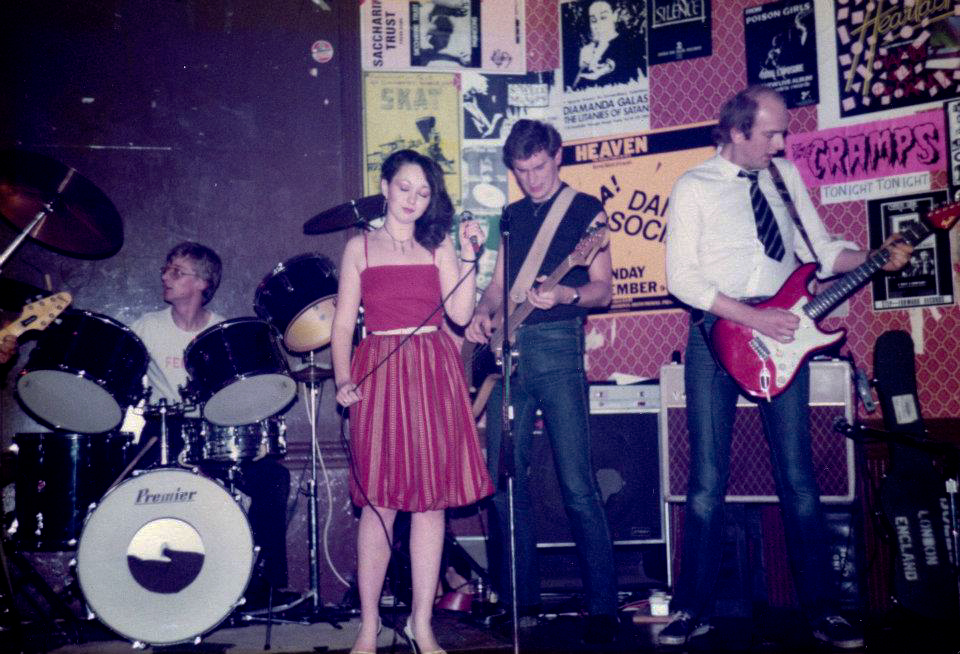 The 1982-83 line-up regarded by some as Fenzyx's most commercial featured Bill Muir on lead guitar and Liz Quigley on vocals. It was this line-up that played The Flying Crate, as Page 18; the bands pseudonym taken from their book of songs referring to one song in particular on that page which at that time had no title (later to become 'Mixed Up Kid').

In this live recording at The Wellington, Liz dedicates the song 'Bright Lights' to what sounds like "all the penguins in the world"?! (No, we didn't get it either!)

The debut of this line-up at George Robey’s Little Rainbow on 9 November 1982 was marred by an incident on stage which was to touch the band and audience and remain with them for some time afterwards! 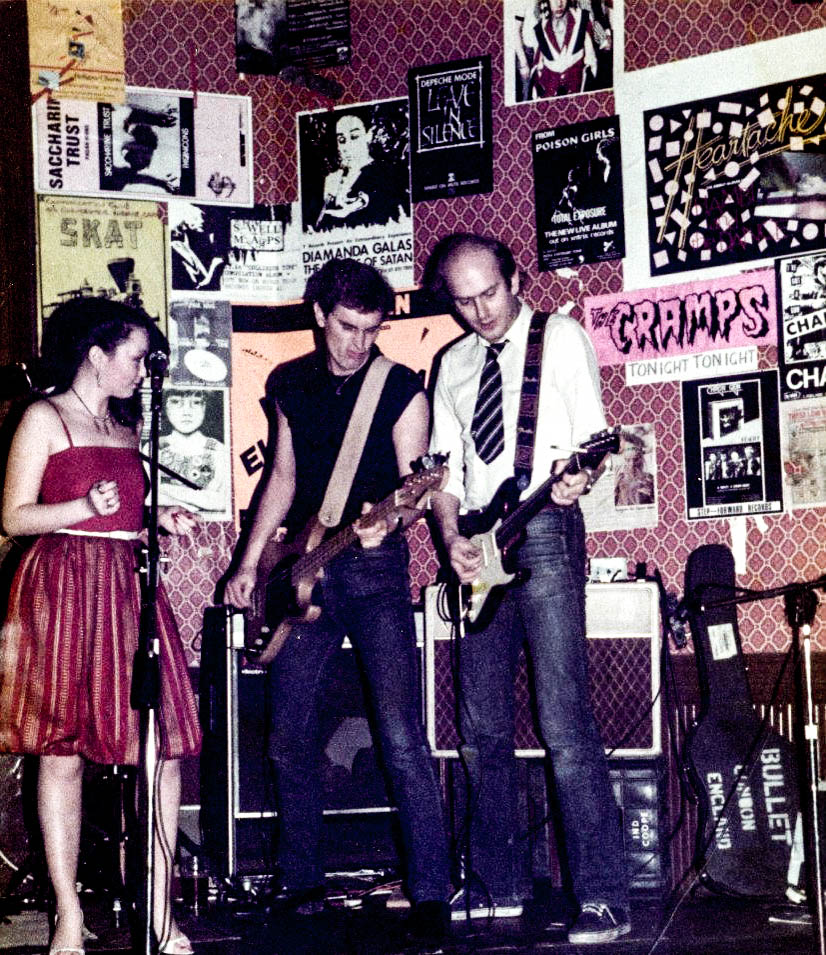 Someone decided that it would be a good idea as a stage effect, to cover each of Paul’s two crash cymbals with a dose of talcum powder so that upon the opening power chord of 'Baby You're Wrong' (a Count Bishops cover), as he hit the two cymbals, the talc would rise and be dispersed, creating a marvellous (and very, very cheap) dry ice / smoke effect for the opening tune.

Perhaps this idea would have worked had it not suffered from too many cooks! Each member of the band at different times increased the dosage so that when it finally settled, not only was Paul completely covered in talc, so was his drum kit, the stage, the rest of the band, and most of the audience! The band kept slipping on stage and Paul could not keep his kit from sliding further and further away from him! Consequently, as shows go it was not one of their finest and therefore no known recordings from this live performance (now) exist! Needless to say, this effect was never tried again!

This incident overshadowed an earlier one at the Penn Road Festival in 1980, where the band was playing on the back of a parked flatbed lorry. Standing at the rear of the lorry's platform, Jim lost his entire bass stack off the back during the encore 'Freebird', caused by a child trying to climb up onto the lorry using the mains lead as a climbing rope! It is said that no one in the band noticed that Jim had stopped playing, but thankfully no damage was done, (except to Jim's ego!)

Ultimately the Fenzyx line-up turned out to be fluid although that was never intended. The core line-up of Tony, Jim and Paul stayed together until virtually the very end, Nick Watts filling in on bass for a session at the BBC with Alex Couchman on vocals in late 1984 after Jim's departure a few weeks earlier. By then, Paul had already announced that he intended to quit after the BBC session.

A long succession of different vocalists and lead guitarists throughout its life had taken its toll and the band folded after the BBC recording on 25 November 1984.

However that is not the end of the story.

Fast forward 32 years to 2016. Gerry & The Toys (fronted by Gerry Lyons) had released their 'Waltham Forest Save Our NHS' fundraising CD which included cover versions of 'Soldiers' and 'Angels of Mercy', along with another Fenzyx original, 'The Indians'. Following this, Gerry, Tony, Jim and Paul were approached by Dizzy Holmes of Detour and Bin Liner Records about inclusion of the original Fenzyx recordings of 'Soldiers' and 'Angels of Mercy' on volume 10 of the 'Bored Teenagers' series of punk compilation albums scheduled for release the following year.

'Bored Teenagers #10' was released on 24 November 2017, and not only featured 'Soldiers' and 'Angels of Mercy' as planned, but the CD version also included the previously unreleased 'Angels of Mercy Dub', all three recordings taken from the original 1980 master tape. Tony, Jim, Gerry and Paul reformed Fenzyx to play the album launch the following night at N5 Live at The Gunners, the first time the original line-up had played together in over 35 years, and by an amazing coincidence, exactly 33 years to the day that the band folded in 1984!

By a further strange coincidence, it was the 'Angels of Mercy' connection to the NHS in 2016 that ultimately brings the Fenzyx story full circle.

Take a listen to our tracks on 'Bored Teenagers' Vol. 10 here and then buy or download them here 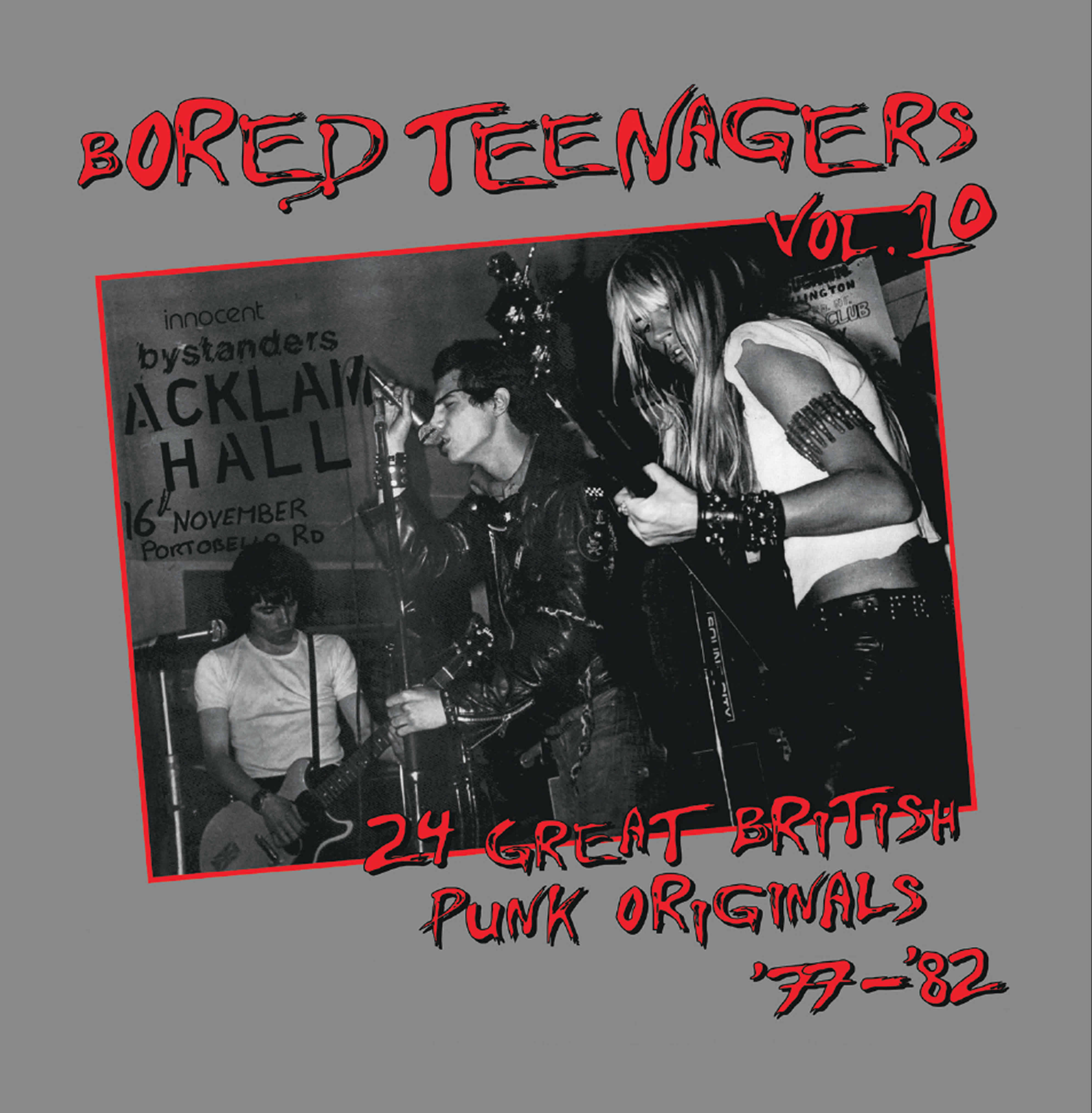 Following this, Tony, Jim, Gerry and Paul decided that it would be fun to carry on with the band, playing a couple of gigs a year and recording a few tunes.

So with that, on Saturday 7th July 2018 the band played the Walthamstow Festival at The Sinbin at The Plough and Harrow in Leytonstone and then headed off to the studio on Sunday 12th August 2018.

'You Control The Lights', 'None of Your Concern' and 'Possession' were recorded at Chapel Bell Studio in Uxbridge with John Bell, sound engineer and studio owner at the helm. One of the tunes, 'Possession' features on 'Waltham Forest's Finest' CD released on 16th June 2019, profits from the sale of which will be donated to Wood Street Community Radio. The 'You Control the Lights' EP containing all 3 tunes was released on 13th June 2019. Download or stream them here